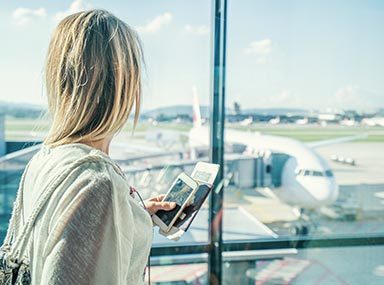 You’ve probably heard the buzz surrounding REAL ID compliance in the media or have seen signs at airport security warning travelers about changes in ID requirements. Use the following information to clarify the facts about the REAL ID and what do you need to do to be ready before the deadline.

What is the REAL ID Act?

The REAL ID Act was passed by Congress in 2005, setting minimum security standards for state-issued driver’s licenses and identification cards. It prohibits federal agencies like the TSA from accepting licenses and identification cards from states that do not meet these standards. According to the Department of Homeland Security (DHS), “the purposes covered by the Act are: accessing Federal facilities, entering nuclear power plants, and boarding federally regulated commercial aircraft.” Airports are considered federal facilities, so the REAL ID Act affects your ability to pass through security in order to board your flight.

To see what your REAL ID should look like according to your state, visit TSA.

Do I need a REAL ID?

You don’t need a REAL ID if you’re under 18 years old, don’t intend to fly domestically, to vote, serve jury duty or to drive.

When is the deadline?

Beginning October 1, 2021, you will need to have a REAL ID-compliant license or another acceptable form of ID, such as a valid passport or U.S. military ID, to fly within the U.S. Please note the TSA will not accept temporary or interim REAL IDs from the Department of Motor Vehicles (DMV).

How to get a REAL ID

Visit your state’s driver’s licensing agency website to find out exactly what documentation is required to obtain a REAL ID. Some states are allowing for the electronic submission of required documents for REAL ID applications while other states may impose additional requirements, so check with your state’s DMV website before visiting them in person. According to the Department of Homeland Security, at a minimum you must provide documentation showing:

Flying and the REAL ID

As of the October 1, 2021 deadline, a traditional driver’s license will no longer be accepted through airport security. All passengers on domestic flights will be required to present a REAL ID – or an acceptable alternative – at airport security. Even if you have TSA Pre✓® or use CLEAR, you’ll still need a REAL ID or valid passport. The TSA does not require children under 18 to provide identification when traveling within the United States, however, it’s wise to contact your airline for questions regarding specific ID requirements. Certain airlines may require proof of the child’s age, such as a birth certificate or passport.

Acceptable ID alternatives would include the following:

Don’t let your travel plans be interrupted. Plan ahead to avoid the last-minute rush and be ready before the October 1, 2021 deadline.

Subscribe to the Smart Travels Newsletter to learn more about traveling easier, safer and smarter.