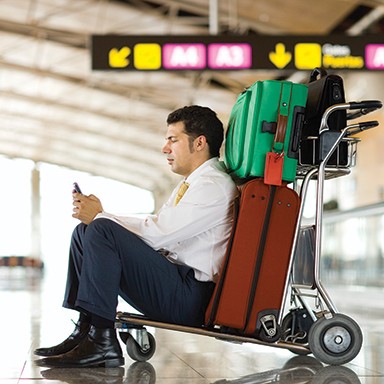 If you purchased a nonrefundable ticket but missed your flight and it’s your fault, talk to the airline as soon as possible.

JohnnyJet.com maintains a concise list of all the major airline phone numbers, websites and phone apps.

Normally you need to be at the airport and ready to fly within two hours of your original flight time.

Some airlines have an unofficial policy called the “flat-tire rule” or the “two-hour rule.” This rule generally allows you to get on standby for the next flight. Airlines may charge a change fee.

Your latitude sometimes depends on why you were late, whether because of something you control, or an unforeseen issue such as a major accident on the road that stalls traffic.

This rule typically does not apply for international flights. You will often have to pay full price for a new ticket in these situations, but always try and at least plead your case to the airline.

Travelex Insurance Services customer George B says “In the summer I escorted a group to Rome at the end of August. Our return was scheduled for the day Hurricane Irene went through the Northeast. We could not fly home for four days until airports opened up and we were rescheduled to return home. Everyone was thrilled to have four extra days in Rome, with many expenses covered by Travelex. A hurricane delaying their return home for four days was not a deciding factor in purchasing their insurance, but all of these clients are thrilled they had it.”

The Travelex Insurance Services’ Travel Basic and Travel Select plans offer trip cancellation and interruption coverage for flight cancellations or delays for covered reasons, like being involved in a documented traffic accident or are delayed by the airline for more than five hours.

Travel Insurance is underwritten by Berkshire Hathaway Specialty Insurance Company, NAIC # 22276. Travel Assistance & Concierge Services are provided by the designated provided listed in the Policy. The full coverage terms and details, including limitations and exclusions, are contained in the insurance policy.